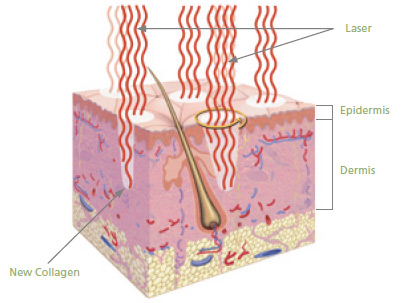 Depilation is a generic term for hair removal which affects the part of the hair above the surface of the skin. The most common form of depilation is shaving.

Another popular option is the use of chemical depilatories, which work by breaking the disulfide bonds that link the protein chains that give hair its strength, making the hair disintegrate.

Epilation is removal of the entire hair, including the part below the skin. Some individuals may use waxing, sugaring, epilation devices, lasers, IPL (intense pulsed light) and electrology. Hair is also sometimes removed by plucking.

Hair removal has been practiced for centuries in almost all human cultures. The methods used vary among times and regions, but shaving is the most common method.

Patients’ body hair was once shaved before surgery for reasons of hygiene; however, this turned out to be counter-productive, and as a result patients are no longer shaved in many hospitals. The shaving of hair has sometimes been used in attempts to eradicate lice or to minimize body odour due to accumulation of odour causing micro-organisms in hair. Some people with trichiasis find it medically necessary to remove ingrown eyelashes.

Hair is normally removed for social and sexual reasons related to the social role of hair in human society. Many cultures have an aesthetic “ideal” amount of hair for males and females. People whose hair violates such standards may experience real or perceived problems with social acceptance.

Many men in Western cultures shave their facial hair, so a minority of men has a beard, even though fast-growing facial hair must be shaved daily to achieve a clean-shaven or hairless look. Some men shave because they cannot grow a “full” beard (generally defined as an even density from cheeks to neck), because beard colour is different than scalp hair colour, or because it grows in many directions, making a groomed look difficult. Some men shave because their beards are very coarse, causing itchiness and irritation. Some men grow a beard from time to time to change their appearance.

In many cultures, women frequently remove their body hair, believing it is unattractive and not feminine. Women may also remove some or even all of their pubic hair to look more youthful and attractive for their sexual mates or themselves. The practice is most common among upper-class women, who get treated with lasers or electrolysis to permanently remove body hair and save future labor. In some U.S. cities, wealthy parents may give this to their daughters as a high school graduation gift. Many women of African descent commonly shave their pubic hair to reduce irritation during sexual intercourse.

Head-shaving is a part of the Buddhist, Christian, Muslim, and Hindu traditions. Buddhist and Christian monks generally undergo some form of head-shaving during their ordination. Brahmin children have their heads ritualistically shaved before beginning school.

In some parts of the Theravada Buddhist world, it is common practice to shave the heads of children. Weak or sickly children are often left with a small topknot of hair, to gauge their health and mark them for special treatment. When health improves, the lock is cut off.

The Jewish, Baha’i, and Jain religions all explicitly prohibit head-shaving, although Reform Jews tend to take a more liberal view of this policy. Sikhs take an even stronger stance, opposing all forms of hair removal. One of the Sikh Five Ks is Kesh, meaning “uncut hair”. To Sikhs, the maintenance and management of long hair is a manifestation of one’s piety.

Shaving a man’s scalp hair has been used as a means of stripping them of their former identity. This is sometimes done at the beginning of military training, and is done as part of a process of trying to instill a new identity into the new soldier. No military in the world does this to female recruits, possibly because of expectations of psychological trauma. Female recruits sometimes have their head “bobbed” (cut so it is off their shoulders).

Many militaries also require males to be clean-shaven. It is sometimes required so that emergency air breathing masks or protective masks such as gas masks can form an air-tight seal on a clean-shaven face. This can cause a problem for males with pseudofolliculitis barbae, a severe skin reaction caused by shaving coarse or curly facial hair too closely. The main reasons for this requirement are to improve hygiene and general sanitation, such as the prevention of lice infestations when these men are in a field environment where they will be living in close quarters and have little to no access to showering facilities.

In some situations, people’s hair is shaved as a punishment. After World War II, this was a common punishment in France for women who collaborated with the Nazis during the occupation. Sometimes, male prisoners are shaved to convert their “freeman” identity to a “prisoner” identity, and to make them more easily identifiable if they were to escape from prison. In Arab countries, shaving off beards and eyebrows is sometimes used to shame and humiliate male prisoners.

Many products on the market have proven fraudulent. Many other products exaggerate the results or ease of use.

Permanent hair removal involves several imperfect options. A number of methods have been developed that use chemicals, energy of varying types, or a combination to target the areas that regulate hair growth. Permanently destroying these areas, while sparing surrounding tissue can be a difficult challenge.

Permanent hair removal for most:

Permanent Reduction for many:

Lasting hair inhibition for many (requires continuous use):

A new method of epilation is to use enzymes that inhibit the development of new hair cells. Hair growth will become less and less until it finally stops, normal depilation/epilation will be performed during that time. Products include the prescription drug Vaniqa (active ingredient eflornithine hydrochloride inhibiting the enzyme ornithine decarboxylase) – effective for 46% of women.

Depilation lasting several hours to several days can be achieved by:

Epilation lasting several days to several weeks can be achieved by:

Some methods are still in the experimental stage or have been banned for most uses due to adverse effects.

Many methods have been proposed or sold over the years without published clinical proof they can work as claimed.