Do you have visable signs of of aging through dark brown spots, fine lines, broken capilliaries (red spider veins), raised bumps on the skin which you cannot remove, embarrassing skin tags or unwanted dark facial hair? This treatment is a definite must for you. These procedures can achieve results some lasers cannot. You will be amazed with your new clear skin removing conditions you thought were permanent.

ThermoClear treatments are available as an add on service to laser treatments or other skin treatments of the face, neck and/or décolleté/chest areas. Please note:

​​A slight heat sensation is felt during the treatment.

Area is slightly red and inflamed immediately after treatment, but may be covered with mineral skin care.

May take up to 5 or more days to completely heal.

More than one treatment may be necessary 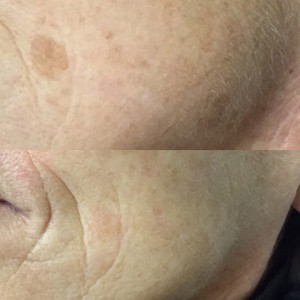 ThermoClear is a radiofrequency current that is attracted to the water in various skin conditions. It uses a tiny probe on the surface of the skin to dehydrate the problem area, causing the body (over a few days) to exfoliate the dried skin that removes and clears the skin of the condition. The procedure is minimally invasive, is virtually painless and requires no down time.

The probe is applied precisely to the area to be treated. Most clients experience a warm pricking sensation. This is more noticeable in sensitive areas around the lips and nose. A topical anesthetic is applied prior to treatment to minimize any discomfort.

How long is the Treatment?

How is it Different From Electrolysis?

ThermoClear technology stays on the top layers of skin, the epidermis. Electrolysis works into all three major skin layers (epidermis, dermis and subcutaneous tissue). The advantage of this treatment is that it is not affecting deeper layers of skin that remove tissue.

What Results Can You Expect?

Results can be seen with a single treatment and in most cases are immediate and are often permanent. When treating acne scarring, the results may take 8 to 12 weeks to allow new collagen to form.

How many treatments are needed?

Typically one to two treatments are necessary. This varies depending on the condition being treated

Is there any downtime?

There is very little downtime, and side effects are very minimal and very manageable. You will notice some fine scabbing after a few days in the area treated, at this time can be covered with makeup. This will resolve in about 7-10 days, it is ideal to combine this treatment with Fraxel Laser Treatment, allowing the patient to recover at one time and gain the benefits of both treatments for optimal results!

What are pigmented lesions?

Pigmented lesions are concentrations of melanin in the skin. They can be of any size or shape and may also be slightly elevated on the skin’s surface. Some of the most common of all pigmented lesions are freckles, solar lentigines (liver spots and sun spots) and cafe au lait spots. These are all considered to be benign. Freckles are most commonly the result of genetics or sun exposure. Freckles caused by sunburns have irregular borders and are typically darker brown than those that are caused by genetics. Solar lentigines are usually caused by excessive sun exposure, therefore they appear on areas of the body that are frequently exposed to the sun such as the face, hands, shoulders and arms. They can be of any color from light brown to black. Cafe au lait spots are light brown, flat and larger in size than other types of pigmented lesions. They are usually classified as a type of birthmark because they exist at birth. However, some may appear with age or with the development of the disease neurofibromatosis. Cafe au lait spots that appear as an indication of neurofibromatosis are generally larger and appear at a greater frequency on the body (totaling more than 6).

Is it safe to treat the lesions?

We strongly encourage you to have your doctor examine any spot that is questionable and we will not treat any lesion that we feel is not safe to do so.

What Skin Conditions Can Be Treated?

Spider veins, wavy, thin, reddish-purple veins, which often appear around your nose can be a result of sun exposure, oral contraceptives, hormone therapy, aging process, acne, or just plain genetics. Although they are not usually a medical concern, they make many people self-conscious about their appearance. Spider Veins (also known as telangiectasia and varicose veins) are a group of widened veins that can be seen through the surface of the skin. Their wheel-and- spoke shape tends to resemble a spider.

Sun and age spots are concentrations of melanin in the skin. They can be of any size or shape and may also be slightly elevated on the skin’s surface. They are most commonly referred to as freckles and liver and sun spots. These are all considered to be benign. Freckles are most commonly the result of genetics or sun exposure. Freckles caused by sunburns have irregular borders and are typically darker brown than those that are caused by genetics. Sun/liver spots are usually caused by excessive sun exposure, therefore they appear on areas of the body that are frequently exposed to the sun such as the face, hands, shoulders and arms. They can be of any color from light brown to black.

An acrochordon (a.k.a. skin tag, pedunculated papilloma, or fibroepithelial polyp) is a small benign tumor that forms primarily in areas where the skin forms creases, such as the neck, armpit, and groin. They may also occur on the face, usually on the eyelids. Though larger have been seen, they are usually between the size of a grain of rice and a golf ball. The surface of an acrochordon may be smooth or irregular in appearance. The acrochordon is often raised from the surface of the skin on a fleshy stalk called a peduncle. Microscopically, an acrochordon consists of a fibrovascular core, sometimes also with fat cells, covered by an unremarkable epidermis.

Skin tags are harmless, although they are sometimes irritated by clothing or jewelry and can interfere with shaving and other routine grooming. Why and how skin tags form is not entirely known, but there are correlations with age and obesity. They are more common in people with diabetes mellitus and in pregnant women. Acrochorda have been reported to have an incidence of 46% in the general population. A genetic component (causation) is thought to exist.

Milia are common non-cancerous skin findings in people of all ages. Milia formed directly from sloughed-off skin are small, fluid filled lesions (cysts) usually found on the face, while lesions formed indirectly are small cysts found within areas of skin affected by another skin condition.

Milia are formed when skin does not slough off normally but instead remains trapped in a pocket on the surface of the skin. An individual milium is formed from a hair follicle or from a sweat gland. In primary milia in infants, the oil gland may not be fully developed. Secondary milia often develop after injury or blistering of the skin, which disrupts and clogs the tubes leading to skin surface. Secondary milia can also develop on the sun-damaged skin of middle-aged and older people.

Sebaceous hyperplasia is a disorder of the sebaceous glands in which they become enlarged. These glands are located within the skin and are responsible for secreting an oily substance named sebum. They are commonly associated with hair follicles but they can be found in hairless regions of the skin as well. Their secretion lubricates the skin, protecting it from drying out or becoming irritated. Sebaceous hyperplasia generally affects middle-aged to elderly adults. The symptoms of this condition are 1-5 mm papules on the skin, mainly on the forehead, nose and cheeks, and sebarrhoeic facial skin. The papules may be cauliflower-shaped. Acne is also a symptom of this glandular disorder. It differs from the type of acne that affects adolescents and young adults, in that it is more of an abnormally discolored patch that is not cured by topical treatments alone. The radio frequency works on these while the laser will not because the lasers needs to see a color target – (blood or melanin).

Cherry hemangiomas are small vascular irregularities on the surface of the skin that occur commonly as we age.
They look like little red spots or bubbles and can appear anywhere on the body. As a general rule, they do not
become much larger than an eraser on a pencil. The frequency of cherry hemangiomas increases with age.

Whether you are looking to book a Virtual Consultation or an in person assessment and complimentary consultation at either location, we always book a full 1 hour to 90 minute appointment to ensure we answer all your questions

Book in Hamilton Book in Burlington